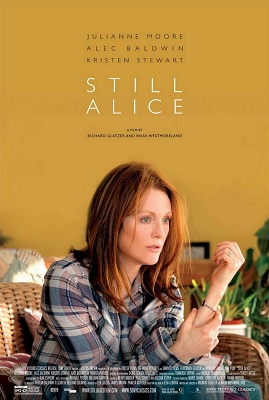 Still Alice is a 2014 American independent drama film written and directed by Richard Glatzer and Wash Westmoreland and based on Lisa Genova's 2007 bestselling novel of the same name. The film stars Julianne Moore as Alice Howland, a linguistics professor diagnosed with familial Alzheimer's disease shortly after her 50th birthday. Alec Baldwin plays her husband, John, and Kristen Stewart, Kate Bosworth and Hunter Parrish play her children, Lydia, Anna and Tom.

Glatzer and Westmoreland were approached by Lex Lutzus and James Brown to adapt Genova's novel in 2011, when Glatzer had just been diagnosed with amyotrophic lateral sclerosis (ALS). Moore was their first choice for the lead role; she researched Alzheimer's disease for four months to prepare for the part. The film was shot in New York in March 2014, with a budget of $4 million.

Still Alice had its world premiere at the 2014 Toronto International Film Festival on September 8, 2014. It was released theatrically on January 16, 2015, and grossed $43.9 million at the international box office. It received critical acclaim, particularly for Moore's performance, who won numerous awards including the Academy Award for Best Actress. She dedicated her Academy Award win to Glatzer, who died from ALS in March 2015. The film was named among the year's top ten independent films by the National Board of Review.